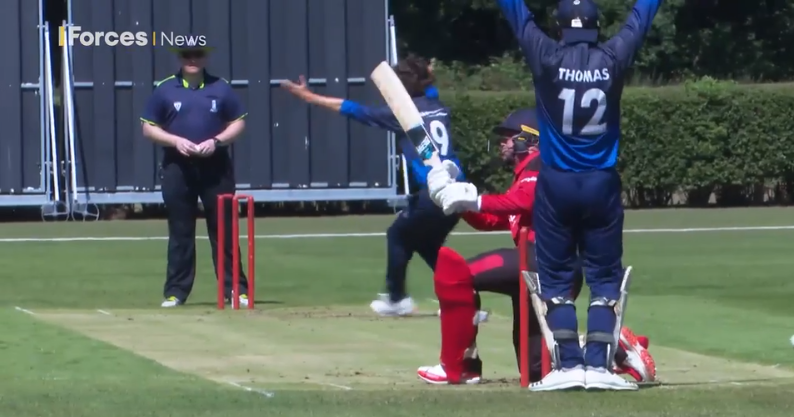 Despite leaving with two losses including one spectacular collapse, our combined Blues and Authentics team could not have asked for a more enjoyable return to cricket. Our profuse thanks must go to those within the Army setup who worked so hard to get this fixture on, and to their players and officials there on the day, many of whom had worked on the front line during the pandemic and could not have been better spirited hosts and opposition. The Army’s report of the day alongside scorecards and highlights can be found here: https://cricket.armysportcontrolboard.com/army-men-victorious-against-oxford-university-in-the-first-covid-cricket-fixture-of-the-season/

The new T20 kit finally got an outing, as 14 lads made the trip from all over the country to Aldershot to take on the Army in two T20s. Having been sent strict instructions from Pettman in France that team warm-ups didn’t meet the Army’s COVID rules, it was quite a surprise to rock up and find out they’d been netting and playing football for the past hour. Nevertheless, the professionalism and adaptability of the day’s two skippers Searle and Thomas shone though, and with a foam roller for a stump we looked the business. Searle won the toss and elected to bowl first on a green-tinged pitch.

Debutants Barker and Dare opened up, and the Army got off to a bit of a flier, with their opener pulling the second ball for 6. However, any illusions the deck was a road were shattered when Marshall came on to bowl. With the pitch turning early doors he ripped through the top order with 4-10 off 4 overs. Following his lead, the rest of the bowlers kept a lid on the Army (Dare with his first wicket) and they finished on 134-6.

The run chase never really got going, as the Army’s spin attack got on top early and left us 30-4 off 8 overs. Searle came in at 6 to cries of “skipper didn’t fancy it” from the oppo, and held the back end of the innings together for 22, while Curtis hit a couple of big bombs in his entertaining 26. However once these two fell (Searle the first of three scoops to not clear short fine leg that day), the Army quickly finished the job and bowled us out for 105.

Change of captain, change of luck was the plan, but it didn’t start well as Thomas lost the toss and the Army batted first again. At the end of the powerplay things were pretty even at 42-1, with Searle getting an early wicket but Livingstone being hit ‘for the first 6 since I was 18’. As before, it got harder to bat outside the powerplay, and Pyman picked up his first wicket for the club, well caught by Livingstone. Lester ‘on a pitch made for me’ did indeed hit his areas and had their big leftie in trouble, except the two times he cleared the front leg and bombed Dom over midwicket. Lester had the last laugh though, pinning him in front. With an end now open, Oxford picked up regular wickets through O’Callaghan and Pyman, before Searle came back on to unconventionally clean up the tail, sending one bloke to hospital with a beamer, a dark moment in the day. The Army finished on 142-8, giving the lads another chance to chase a competitive total.

A reshuffle of the top 4 sent Freeman out to open with Oliver, and the two got the chase off to a fantastic start with a mix of horrid plinks, gorgeous drives and sixes (Freeman on the charge hitting their left arm quick over mid-off, Oliver getting their spinner up over fine leg). A double wicket over put the brakes on a touch, but Freeman kicked on with Wight in support. Two more maximums took Freeman to an excellent 50, and although Wight fell, Marshall took over and they advanced the score to 113-3 off 15 overs.

Then came what can only be described as a truly spectacular collapse. The Army’s quick bowled a horrible drag down slower ball, landing at his feet and on the way down again by the time it reached Freeman, who could only pull it straight down deep square legs throat. Thomas was run out first ball, O’Callaghan trapped in front, Marshall caught behind and Pyman bowled to leave us 118-8. Lester then flicked one straight to midwicket to make it 124-9. Livingstone nailed his first ball down the ground, only to be dropped at long off, before bringing out the big leave off the last ball to set Searle 17 to win off the last over. A bottom edge for 4 through the keeper’s legs first ball kept the crowd interested, but Livingstone was last man out two balls later to bring the innings to a close.

Although the results didn’t go the way we’d have liked, it was fantastic just to be out there, and a long overdue fines meeting had Searle comfortably lose (or win depending on how you look at it).

Once again, thanks to all involved for making the day possible!